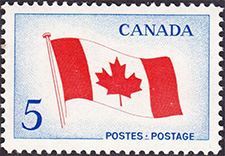 The value of a The National Flag - 5 cents 1965 stamp depends on several factors such as quality and wear, supply and demand, rarity, finish and more. Values in the section are based on the market, trends, auctions and recognized books, publications and catalogs. This section also includes information on errors and varieties and characteristics.

On June 30, 1965 the day preceding Canada's national holiday, the Canada Post Office issued a special postage stamp honouring the nation's new national flag. The first distinctive Canadian banner in the nation's history, the red and white maple leaf flag was first officially raised over the Peace Tower of the Houses of Parliament on February 15, 1965. It was raised simultaneously at noon of that day on government buildings, and private flagpoles across the nation and on Canadian embassies and high commissions around the world. The selection of Canada's national flag was made by a Committee of the House of Commons late in 1964, and the selection was approved by the House after a lengthy debate. The design was the result of study by many experts on heraldry and after winnowing and selection of hundreds of submissions from professional and amateur designers by the parliamentary flag committee. The flag is in the proportions of two-to-one in the relationship of length to width. The central square of the flag is in white, dominated by an 11-point stylized maple leaf, and the end portions are bands of solid red, each one being one-half the width of the central square. This flag stamp was printed in red and blue. The flag, central portion of the stamp, was shown in red and white, flying on a mast in a moderate breeze. Background of the stamp is blue. The stamp is large size, horizontal format.