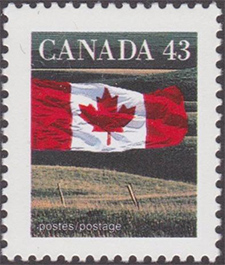 The 1992 43 cents domestic rate design features the flag before a typical Canadian Prairie scene, following the tradition of showing a background from various regions of the country. Since February 1965, the Canadian Maple Leaf Flag has been flown over government buildings, office towers, private residences and embassies abroad. Its image was flashed around the world on the side of the Canadarm used in space. Millions of Canadians have travelled abroad displaying the flag on anything from articles of clothing, knapsacks and suitcases, to car windshields. The flag on the Peace Tower is the largest flown by the Canadian government. It measures 2.28 metres in height and 4.57 metres in length. This is nearly twice the size of flags flown elsewhere.