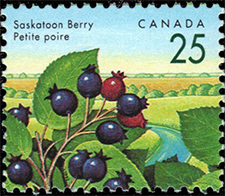 Found throughout Canada, 15 different species of the saskatoon berry have various names. It was useful in the early West where Indians and settlers would prepare pemmican, a paste made from buffalo meat, fat and berries, to last through the long winter months. They were ideal for jams, jellies, pies, muffins or pancakes. Edible Canadian wild berries were featured on 7 definitive stamps issued on August 5, 1992, replacing the Canadian mammals series of 1988.