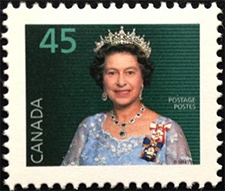 On July 31, 1995, Canada Post Corporation issued a 45 cents definitive stamp featuring Queen Elizabeth II. This portrait was captured by internationally Canadian photographer Yousuf Karsh. Set against a lush, turquoise background, the Queen is distinguished as the only person who can be honoured on a Canadian stamp while she is still living. Since the 16th century, some 32 French and British kings and queens have reigned over Canada. In 1867, the Fathers of Confederation vested executive authority and many statutory responsibilities in Queen Victoria, her heirs and successors. In 1947, under Letters Patent approved by George VI, all the sovereign's powers and authorities in Canada were delegated to the Governor General.

Designed by Tom Yakobina
Based on a photograph by Yousuf Karsh