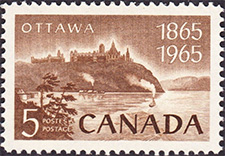 The value of a Ottawa - 5 cents 1965 stamp depends on several factors such as quality and wear, supply and demand, rarity, finish and more. Values in the section are based on the market, trends, auctions and recognized books, publications and catalogs. This section also includes information on errors and varieties and characteristics.

This stamp commemorated the final selection of Ottawa as the national capital of Canada, in October of 1865. The proclamation of the selection was the definitive act in a drama that had seen the national capital shift between Montreal, Toronto, Quebec and Kingston for many years and which had been responsible for cabinet shuffles, resignations and government crises. The 1865 decision was actually the second made in favour of Ottawa. In December, 1857, Queen Victoria had already named Ottawa as capital of the United Province of Canada, now Ontario and Quebec. The question of the location of the seat of government was raised again at the historic Quebec Conference of 1864 and it was decided that since a great deal of money was already invested in Ottawa governmental structures, the city on the Ottawa river should be confirmed as the capital. This halted speculation that the Parliament Buildings would be sold to a religious order. The selection of Ottawa was basically a compromise between the rival claims of Montreal and Toronto. It also had the advantage of being close to the St. Lawrence waterway, and was thought to be in an advantageous military position. A leading role was played in the selection of the city by Sir Edmund Head, Governor-in-Chief of Canada. The first Parliament Buildings were constructed by October 1865, and the first Parliament met in the city in June, 1866. This stamp, one of a series leading up to the Centenary of Canada in 1967, shows a view of the Parliament Buildings from the Ottawa River side as they appeared one hundred years ago.