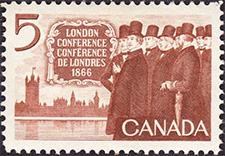 The value of a London Conference - 5 cents 1966 stamp depends on several factors such as quality and wear, supply and demand, rarity, finish and more. Values in the section are based on the market, trends, auctions and recognized books, publications and catalogs. This section also includes information on errors and varieties and characteristics.

This 5 cents commemorative stamp issued by the Canada Post Office in a pre-centennial programme has been designed to focus attention on the 100th Anniversary of the London Conference which was the 3rd major assembly leading to eventual Confederation in 1867. The historical event recalled by this stamp was convened in England on the 4th December 1866 to negotiate final details for the establishment of the new Dominion and to persuade the British Government to enact necessary legislation to permit founding of the fledgling nation. A delegation of six from Canada and five each from Nova Scotia and New Brunswick included John A. Macdonald, George Etienne Cartier, Charles Tupper and Samuel Leonard Tilley all of whom eventually received knighthoods in recognition of services to their country. With Hewitt Bernard acting in the capacity of Secretary they gathered under the chairmanship of John A. Macdonald at the Westminster Palace Hotel to formulate a draft statute for the British North America Act which was substantially based on 72 resolutions written at the earlier Quebec Conference. Continuous negotiations for 20 days resulted in the need for an adjournment to observe Christmas; on reconvening after the recess agreement was reached on final proposals. Approval by the British Government was followed quickly by Royal Assent by Her Majesty Queen Victoria on the 29th March 1867. Implementation of the act was delayed for some months but on the 1st July 1867 Canada became United as the "Dominion of Canada". The London Conference stamp, rendered in tones of brown, was designed by Paul Pedersen of Brigdens of Winnipeg Limited. It portrays on the left the House of Common on the River Thames, London, towards which faces a group of delegates in attendance at the historic conference. The design has been steel line intaglio engraved by the Canadian Bank Note Company, Ottawa whose facilities will be used to print the full issue.