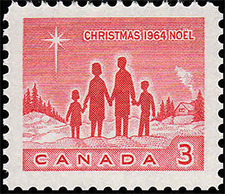 The value of a Family - 3 cents 1964 stamp depends on several factors such as quality and wear, supply and demand, rarity, finish and more. Values in the section are based on the market, trends, auctions and recognized books, publications and catalogs. This section also includes information on errors and varieties and characteristics. This, which was be printed by the steel engraving intaglio process, shows a family group of a man, a woman, and 2 children in silhouette, walking off towards a Christmas star in a typical Canadian winter scene. The design was intended to express the feeling of Christmas as a religious and family occasion, and at the same time to portray the scene in a Canadian environment. It was also meant to tie in with the study of the family's place in contemporary Canadian life which was held in 1964 under the sponsorship of the Governor General and Madame Vanier. Although Canada produced a stamp bearing the words "Xmas 1898" in 1898, the 1964 issues were the first Canadian postage stamps intended especially for use on Christmas mails. The 3 cents denomination was the stamp used for unsealed Christmas greeting cards, and the 5 cents value was the usual rate for first class or sealed letters. Both stamps were the regular or small size, similar to general issue postage stamps. The 5 cents issue will was blue, as are most firstclass rate stamps issued in Canada, and the 3 cents denomination was red. The design selected was one of dozens of sketches submitted by Canadian artists and designers.