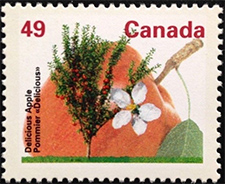 Apples were Canada'most important fruit crop, and the Delicious apple ranked second only to the McIntosh. It was discovered in Iowa in 1872 and named after the state's nickname, "Hawkeye". In 1893, the Stark Brothers took over propagation and renamed it "Delicious" for its creamy white, juicy and sweet texture. It has an oblong shape with a five-crown apex.

Based on photographs by Richard Robitaille