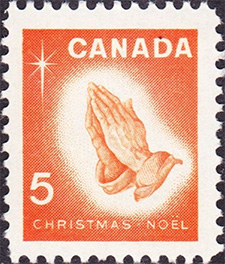 The value of a Christmas - 5 cents 1966 stamp depends on several factors such as quality and wear, supply and demand, rarity, finish and more. Values in the section are based on the market, trends, auctions and recognized books, publications and catalogs. This section also includes information on errors and varieties and characteristics.

For the 3rd consecutive year, the Canada Post Office issued a special set of 2 postage stamps especially designed for the Christmas season. The Christmas stamps were issued in October, and unlike regular commemoratives, these stamps had a relatively long period of sale at local Post Offices. A 5 cents and a 3 cents denomination have been issued, and both have been designed to contribute to the season by extending the Christmas spirit to the holiday mail. These stamps were designed by Geoffrey Holloway, of Arnott Rogers Batten Ltd. of Montreal. The stamp bears as its central feature a reproduction of Albrecht Dûrer's drawing "Betente Hânde", or "Praying Hands". Dûrer, who lived from 1471 to 1528 was a great German Renaissance painter, engraver, woodcut and decorative designer. He was a master particularly of woodcut and copperplate engraving, and among his most widely known works of this type are the engravings "St. Jerome and His Study" and the "Prodigal Son". Dûrer's talents included painting, scientific engraving and drawing as well.

The drawing shows the gnarled hands of an elderly man, held in prayer. It expresses without pretension, man's acknowledgement of his blessings, and the spirit of Christmas. The story goes that as a young man, Dûrer travelled with a friend who was also an artist, both seeking success in their chosen craft. In deference to what he felt was Dûrer's greater talent, his friend offered to work at physical labour, in order to support them both, until Dûrer could succeed in becoming a well-known artist and engraver. It took many years, and by the time Dûrer was an acknowledged master, his friend was too worn physically to continue his own career. One day, Dûrer saw him at prayer. The result was this drawing - a poignant representation of the work-worn hands of a humble and devoted man. The stamps, both of the same design, are of small size, and depict a Christmas star, the praying hands, the words "Noêl", "Christmas", "Canada", and the denomination. The 5 cents denomination is orange in colour, and the 3 cents value has been issued in rose. The stamps were printed by the intaglio steel engraving method and produced for the Canada Post Office by the Canadian Bank Note Company, Ottawa.

This stamp also have a hidden date on it.