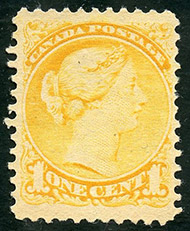 The value of a Queen Victoria - 1 cent 1870 stamp depends on several factors such as quality and wear, supply and demand, rarity, finish and more. Values in the section are based on the market, trends, auctions and recognized books, publications and catalogs. This section also includes information on errors and varieties and characteristics. Owing to its smaller size, the ½-cent stamps in the 1868 issue proved to be more convenient than others of the series. Consequently, the postal authorities arranged to supersede the other larger stamps of 1868 types with corresponding denominations in the size of the ½-cent stamps. The designs were similar to the stamps in the 1868 issue. Postal officials considered the ½-cent stamp desirable because of its special purpose of paying the single periodical rate. Smaller in size than the other denominations of this series, a new ½-cent stamp was issued in July, 1882. Portrait of Queen Victoria from a medallion.

Based on an engraving by Charles Henry Jeens
Portrait engraved by Alfred Jones
Lettering and frame engraved by Henry Earle Sr.